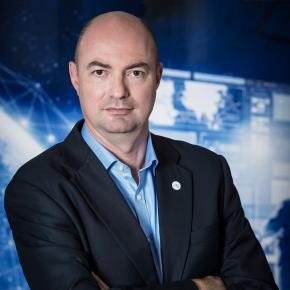 Yigal Unna, born in 1971, was named Director General of the National Cyber Directorate in January of 2018.

Previous Roles:
He began his career in the field of cyber-technology as a captain in the 8200 Intelligence Unit. In 1995, he was recruited by the Israel Security Agency, where he held a series of senior management positions in the signals intelligence (SIGINT) and cyber sectors, which combined intelligence and active operations as well as strategic development and the implementation of new technology.
Unna's positions throughout the his many years of service with the ISA included the following: head of the Cyber-SIGINT Directorate (which was also responsible for the National Authority for Information Security – Cyber Defense), head of the Cyber Division , head of the Cyber-SIGINT Infrastructure Department, head of the Communications Research and Data Mining Department, and head of the Cyber Warfare Unit. Unna founded some of the units he headed and developed them from the ground up, as well as establishing the basis for their operations.
After 22 years of service with the Israel Security Agency, Unna joined the National Cyber Directorate, where he was tasked with setting up the National Cyber Bureau's Cybertechnology Unit as well as leading it until his appointment as head of the unified Directorate.
Education:
Unna holds a bachelor's degree in Management and Middle Eastern History, in addition to an MBA, both from Tel Aviv University. He speaks Hebrew, English, and Arabic.

He is Married and have three children.