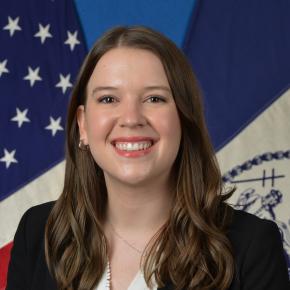 Kelly Moan serves as the Chief Information Security Officer (CISO) of the City of New York (NYC). In this role, Ms. Moan leads the Office of Technology and Innovation’s (OTI) Cyber Command to protect, defend, and respond to cyber threats across the city. Prior to her appointment as the City’s CISO, Ms. Moan served as the CISO for the New York Police Department (NYPD). Throughout her career, she has taken a holistic and mission driven approach to cybersecurity, with a strong focus on collaboration. Prior to joining the NYPD, Ms. Moan was a Division Chief for the Department of Homeland Security (DHS) in Washington, DC. She led the security architecture and engineering team, building and deploying emerging technology to enhance cybersecurity defenses for the Department. She also served as the FedRAMP Joint Authorization Board (JAB) Technical Representative to the CIO, providing subject matter expertise on securing cloud technologies. At other points in her career, Ms. Moan held roles supporting the DoD and USCERT. She also served as an Intelligence and Operations Briefer for the Secretary of Homeland Security. Ms. Moan holds an undergraduate degree from American University and a graduate degree from Pennsylvania State University.